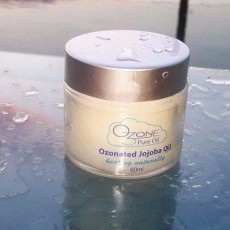 Jojoba oil is the closest match to the naturally occurring sebum of the skin and historically Native Americans used jojoba to treat wounds and sores. These days the the potential of this golden oil, which has been said to have healing properties unmatched by any other oil derived from fruit or seeds, can be seen in its broader uses in the skincare industry. Its many uses include clearing up blemish-prone skin and as an anti wrinkle application because of its ability to make the skin tighter and more supple.

Jojoba is easily absorbed and inhibits your skin’s production of sebum, thus balancing and regulating the oiliness. It penetrates the pores deeply but without clogging, letting your skin breath freely. Its natural antibacterial and fungicidal properties means that our ozonated jojoba oil will impede the reproduction of many types of bacteria on contact, reducing the incidence of rashes and blemishes.

A natural free-radical scavenger, jojoba oil is a natural antioxidant, which can help protect your skin from the harmful effects of free radicals. Jojoba Oil contains large amounts of tocopherols, as well as other minerals considered to promote healthier skin. Naturally hypoallergenic our ozonated jojoba oil will soothe sensitive skin, allowing people with allergies to benefit form the oil’s innate moisturizing properties. Our ozonated jojoba oil does not contain triglycerides so it resists rancidity and maintains its freshness longer, though we always recommend storing you ozonated oils in the refrigerator.